You’ve probably been told to standardize or normalize inputs to your model to improve performance. But what is normalization and how can we implement it easily in our deep learning models to improve performance? Normalizing our inputs aims to create a set of features that are on the same scale as each other, which we’ll explore more in this article.

The answer most of the time is yes! However, unlike normalizing our inputs to the model as a whole, it is slightly more complicated to normalize the inputs to intermediate layers as the activations are constantly changing. As such, it is infeasible, or at least, computationally expensive to continuously compute statistics over the entire train set over and over again. In this article, we’ll be exploring normalization layers to normalize your inputs to your model as well as batch normalization, a technique to standardize the inputs into each layer across batches.

This tutorial is split into 6 parts; they are:

What is Normalization and Why is It Helpful?

Normalizing a set of data transforms the set of data to be on a similar scale. For machine learning models, our goal is usually to recenter and rescale our data such that is between 0 and 1 or -1 and 1, depending on the data itself. One common way to accomplish this is to calculate the mean and the standard deviation on the set of data and transform each sample by subtracting the mean and dividing by the standard deviation, which is good if we assume that the data follows a normal distribution as this method helps us standardize the data and achieve a standard normal distribution.

Normalization can help training of our neural networks as the different features are on a similar scale, which helps to stabilize the gradient descent step, allowing us to use larger learning rates or help models converge faster for a given learning rate.

To normalize inputs in TensorFlow, we can use Normalization layer in Keras. First, let’s define some sample data,

Then we initialize our Normalization layer.

And then to get the mean and standard deviation of the dataset and set our Normalization layer to use those parameters, we can call Normalization.adapt() method on our data.

For this case, we used expand_dims to add an extra dimension as the Normalization layer normalizes along the last dimension by default (each index in the last dimension gets its own mean and variance parameters computed on the train set) as that is assumed to be the feature dimension, which for RGB images is usually just the different color dimensions.

And then to normalize our data, we can call normalization layer on that data, as such:

which gives the output

And we can verify that this is the expected behavior by running np.mean and np.std on our original data which gives us a mean of 2.0 and a standard deviation of 0.8164966.

Now that we’ve seen how to normalize our inputs, let’s take a look at another normalization method, batch normalization.

What is batch normalization and why should we use it? 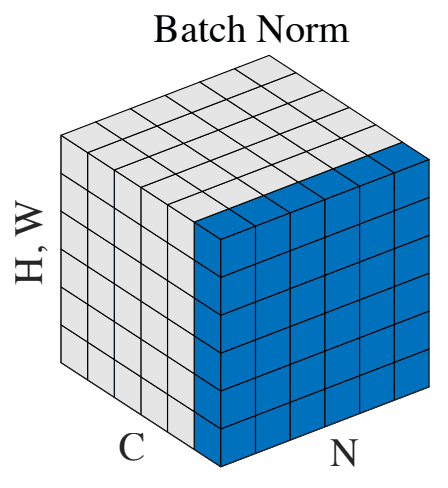 You might be thinking, why can’t we just calculate the mean and variance at a given layer and normalize it that way? The problem comes when we train our model as the parameters change during training, hence activations in the intermediate layers are constantly changing and calculating mean and variance across the entire training set for each iteration would be time consuming and potentially pointless since the activations are going to change at each iteration anyway. That’s where batch normalization comes in.

Introduced in “Batch Normalization: Accelerating Deep Network Training by Reducing Internal Covariate Shift” by Ioffe and Szegedy over at Google, batch normalization looks at standardizing the inputs to a layer in order to reduce the problem of internal covariate shift. In the paper, internal covariate shift is defined as the problem of “the distribution of each layer’s inputs changes during training, as the parameters of the previous layers change.”

The idea of batch normalization fixing the problem of internal covariate shift has been disputed, notably in “How Does Batch Normalization Help Optimization?” by Santurkar, et al. where it was proposed that batch normalization helps to smoothen the loss function over the parameter space instead. While it might not always be clear how batch normalization does it, but it has achieved good empirical results on many different problems and models.

There is also some evidence that batch normalization can contribute significantly to addressing the vanishing gradient problem common with deep learning models. In the original ResNet paper, He, et al. mention in their analysis of ResNet vs plain networks that “backward propagated gradients exhibit healthy norms with BN (batch normalization)” even in plain networks.

“When training with Batch Normalization, a training example is seen in conjunction with other examples in the mini-batch, and the training network no longer producing deterministic values for a given training example In our experiments, we found this effect to be advantageous to the generalization of the network”

Batch Normalization: Under the Hood

So, what does batch normalization actually do?

First, we need to calculate batch statistics, in particular, the mean and variance for each of the different activations across a batch. Since each layer’s output serves as an input into the next layer in a neural network, by standardizing the output of the layers, we are also standardizing the inputs to the next layer in our model (though in practice, it was suggested in the original paper to implement batch normalization before the activation function, however there’s some debate over this).

Sample mean and variance on batch

Then, for each of the activation maps, we normalization each value using the respective statistics

For Convolutional Neural Networks (CNNs) in particular, we calculate these statistics over all locations of the same channel. From the original bath normalization paper,

Now that we’ve seen how to calculate the normalized activation maps, let’s explore how this can be implemented using Numpy arrays.

Suppose we had these activation maps with all of them representing a single channel,

Then, we want to standardize each element in the activation map across all locations and across the different samples. To standardize, we compute their mean and standard deviation using

Then, we can standardize an activation map by doing

and these store the outputs

But we hit a snag when it comes to inference time. What if we don’t have batches of examples at inference time and even if we did, it would still be preferable if the output is computed from the input deterministically. So, we need to calculate a fixed set of parameters to be used at inference time. For this purpose, we store a moving average for the means and variances instead which we use at inference time to compute the outputs of the layers.

However, another problem with simply standardizing the inputs to a model in this way also changes the representational ability of the layers. One example brought up in the batch normalization paper was the sigmoid nonlinear function, where normalizing the inputs would constrain it to the linear regime of the sigmoid function. To address this, another linear layer is added to scale and recenter the values, along with 2 trainable parameters to learn the appropriate scale and center that should be used.

which gives us the output

By default, the BatchNormalization layer uses a scale of 1 and center of 0 for the linear layer, hence these values are similar to the values that we computed earlier using Numpy functions.

First, let’s get our dataset, we’ll use CIFAR-10 for this example.

Training the model gives us the output,

And running the training again, this time with the normalization layer added.

And we see that the model converges faster and gets a higher validation accuracy.

Plotting the train and validation accuracies of both models, 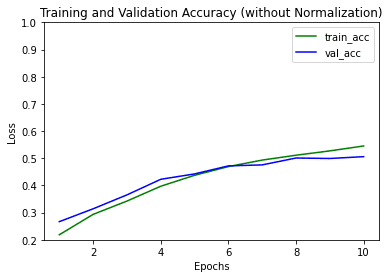 Train and validation accuracy of LeNet-5 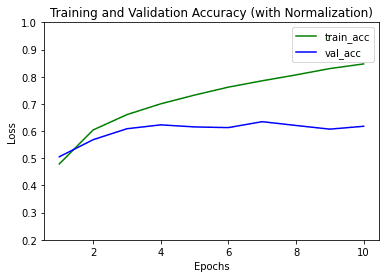 Here’s the complete code for the model with normalization too.

Here are some of the different types of normalization that you can implement in your model:

In this post, you’ve discovered how normalization and batch normalization works, as well as how to implement them in TensorFlow. You have also seen how using these layers can help to significantly improve the performance of our machine learning models.

What If You Could Develop A Network in Minutes

…with just a few lines of Python

Discover how in my new Ebook:
Deep Learning With Python

…with just a few lines of python code

Discover how in my new Ebook:
Better Deep Learning